We had my dad’s memorial this weekend.  It was great to be with family and hear what people had to say.

My dad wanted his ashes put in the swimming hole where he and my mom used to go when they were young teens.  The creek used to be at the end of a short road, surrounded by nothing but woods.  There used to be a beach area down where the water pooled to create the swimming hole.  It’s all overgrown now, and the once dead end is now a quiet country road, with little traffic or congestion.

We piled into our vehicular devices, most of us cramming into my sisters 15 passenger van.  We wise-cracked our way into the neighboring state where my parents grew up.  I’m not sure any of us knew what to expect or quite what to do.

My only brother took the reigns and spoke a few words and let dad go. 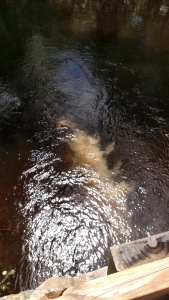 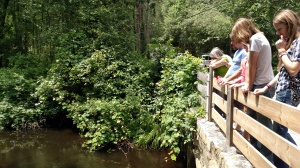 Mom looked on and wept.  On the way back to the car she hugged me, smiled and said “We were so young!”  Such a beautiful peaceful spot.  Perfect for my dad, who sought out the woods and silence to still his active mind.

When family comes to visit we like to make a tour of all the places my parents grew up.  This trip focused on my dad.  We went to the old farm house where he, and his six siblings, grew up.  There is now a fence around it, so I couldn’t get a good look at this old Victorian farmhouse that once sat in the middle of the over 300 acres.

Of course, being the tenacious person that I am, I knocked on the gate to no avail.  Then, having technology at my fingertips, I called the homeowner.  He was rather disgruntled that I deemed it necessary to disturb his afternoon routine and promptly dismissed me saying he wouldn’t open the gate until later in the evening.  Feeling rather miffed, I walked away, not without shouting something about never letting my pets stay at his establishment.  (it was a kennel)

The next stop on our trek homeward was to show us where my dads siblings built their houses on the property.  Then came the spot where my dad built his first house.  His mother had sold him about 35 acres, on which he built a home for his wife and three small children. He had grand plans to open a campground on his newly established estate.

The driveway is quite long and it was hard to get good pictures of the house so my brother, being rather tenacious himself, said “I’m going to pull up the driveway.”  A rather perplexed homeowner came around from the back of the house, probably wondering if we were some kind of crazy cult in our grey 15 passenger van, full of people, followed by a nine passenger SUV, also full of people.  She greeted us with trepidation.  I smiled and cheerfully stretched out my hand, hoping to convey that we weren’t a bunch of lunatics who had randomly pulled up her driveway… oh wait… weren’t we?!  I explained why we were in the area, that my dad had built her lovely home and did she mind if we took a picture.  She smiled, and said “Sure, but don’t mind the chicken poop.” (my kind of place!) 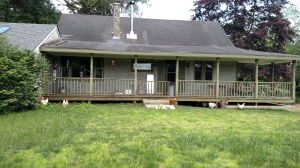 Then, this wonderful, kind woman, invited us to come inside!!!  My mom wasn’t sure she wanted to, as she was afraid the interior would have been altered in some way.  My siblings and I eagerly said “Yes!”  Much to my mom’s delight, the inside had not changed!  It was beautiful.  I don’t remember living there, but my older sister took me into a room and said “This was your room!  Your crib was right here and I used to sit on the floor next to you…” 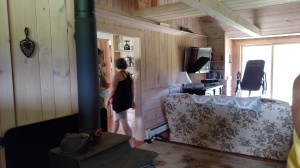 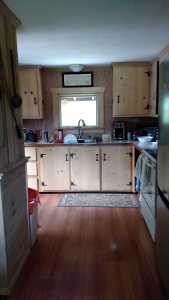 What a special gift we received!

We rounded out the trip with a late lunch, because… it IS all about the food!

So glad to have had this time with my family.

This entry was posted in family. Bookmark the permalink.